Fisht Olympic stadium is an outdoor stadium in Sochi, Russia. Stadium is located in Sochi Olympic Park and named after Mount Fisht.

Fisht Olympic stadium was going to face 3 main phases to make a number of changes in the stadium’s construction. 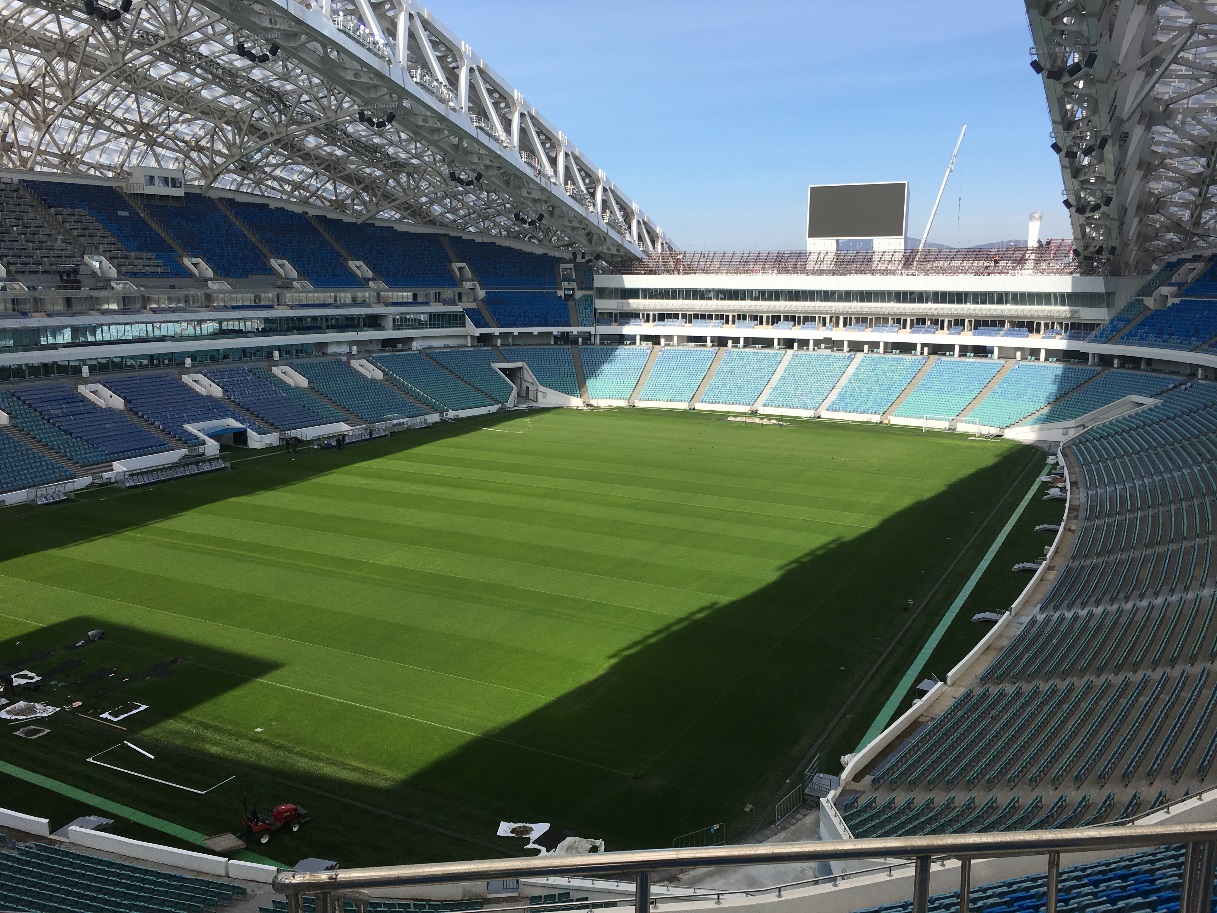 Fisht Olympic stadium near the end of the 2nd construction stage

Phase 3. After FIFA events
After the FIFA events the stadium is going to be reduced in size and become a home arena for the FC “Sochi”.

Fisht Olympic stadium was designed as one of the main sporting facilities for the major international sport events — Olympic/Paralympic games and FIFA Confederations cup 2017 and FIFA World Cup 2018. Therefore, the project faces 3 main stages: an indoor facility with the capacity of 40000 for Sochi 2014, an outdoor facility with the capacity of 48000 — to host FIFA 2018 World cup, and after all it is planned to be a home stadium for the “Sochi” football club. Overall, all these transformations have set one global task for SODIS Lab: to provide Fisht stadium with the most efficient monitoring tools with regard to all the upcoming changes within the projects.

To complete such a task and provide the best result possible SODIS Lab has decided to implement SODIS Building M solution.

Why was SODIS Building M the best solution for this object? 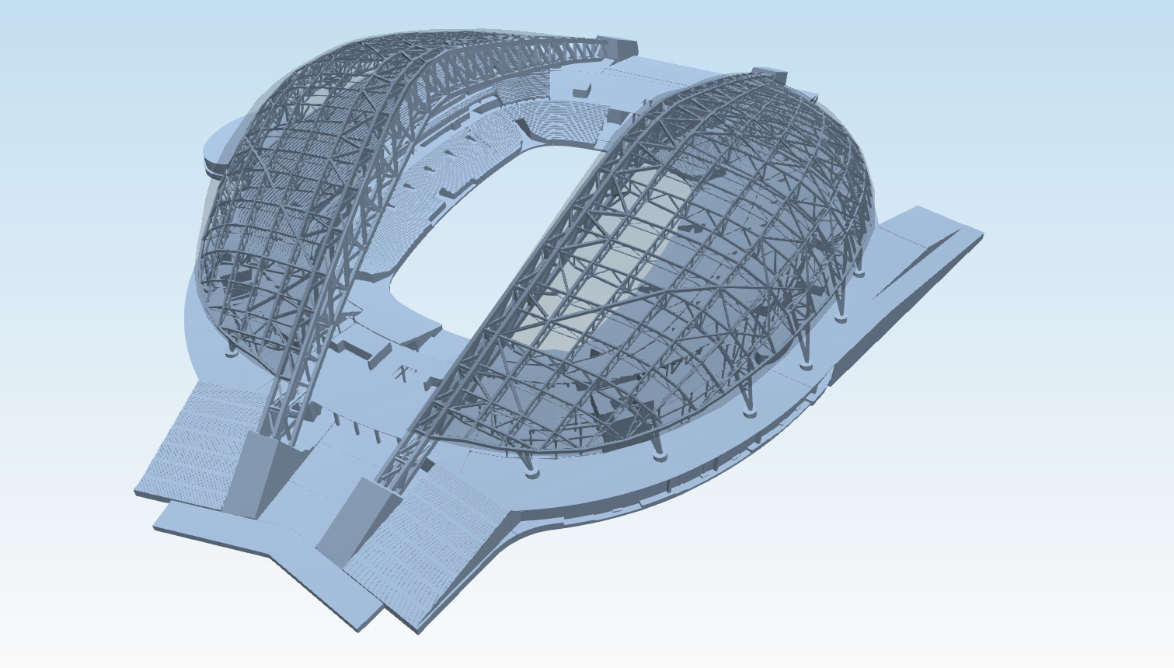 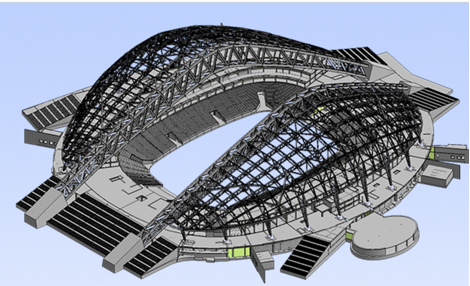 How has SODIS LAB done the building information modelling of the stadium?

Building monitoring of the Fisht Olympic stadium has begun with the creation of its BIM model. This model was going to be based on the two cores behind the SODIS Building M — first core, which was going to monitor structure and the second one — to evaluate all the collected date. To be able to monitor and collect the data SODIS Lab has installed number of sensors throughout the stadium. These sensors included 16 tiltmeters, 80 strain gauges and 16 accelerometers. In addition, to track the spatial movements of the unique coating of the stadium (mainly of its roof), SODIS Lab has used two high end electronic robotic total stations, produced by Leica: TM 30 0.5”and 116 reflectors. All of these sensors have been installed with SODIS Building M software on them, which allowed achieving the best results possible and collecting all the necessary information regarding the conditions of the stadium during all phases of the structures lifecycle. In addition, Sodis Lab has also used the Leica Geosystems software to help with maintaining of all the sensors. 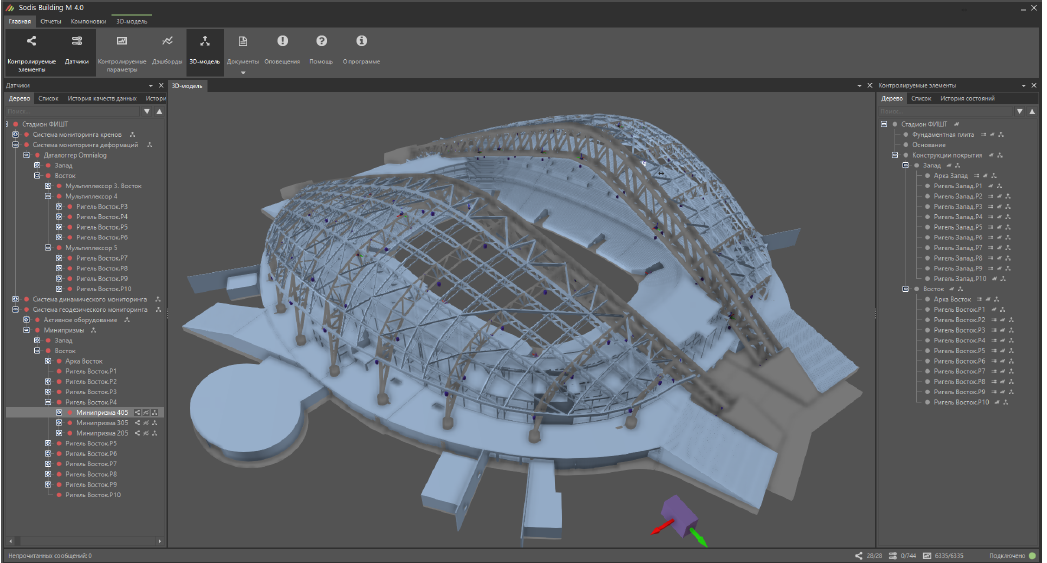 First of all SODIS Building M is a flexible tool, that can work with any type of an equipment. Such flexibility allowed SODIS Lab to choose from many suppliers of the equipment and to end up with the best options for the Fisht Olympic stadium. Furthermore, the system provides a continuous data collection from all the sensors (works in a real time mode) as well as it saves and maintains all the data, which any user can access from anywhere – the only thing, which is required is an access to the internet and login/password combination. In addition, in case of any danger to the construction health, the system will automatically send a signal to the operator, so the user will be able to find a problem as soon as possible and decide on the best way to fix it. Furthermore, due to the specific feature of the SODIS Building M, the software collects the data of not only the object as whole, but also an information regarding each independent element and equipment (e.g., windows, doors, columns, basements etc.) of the stadium. 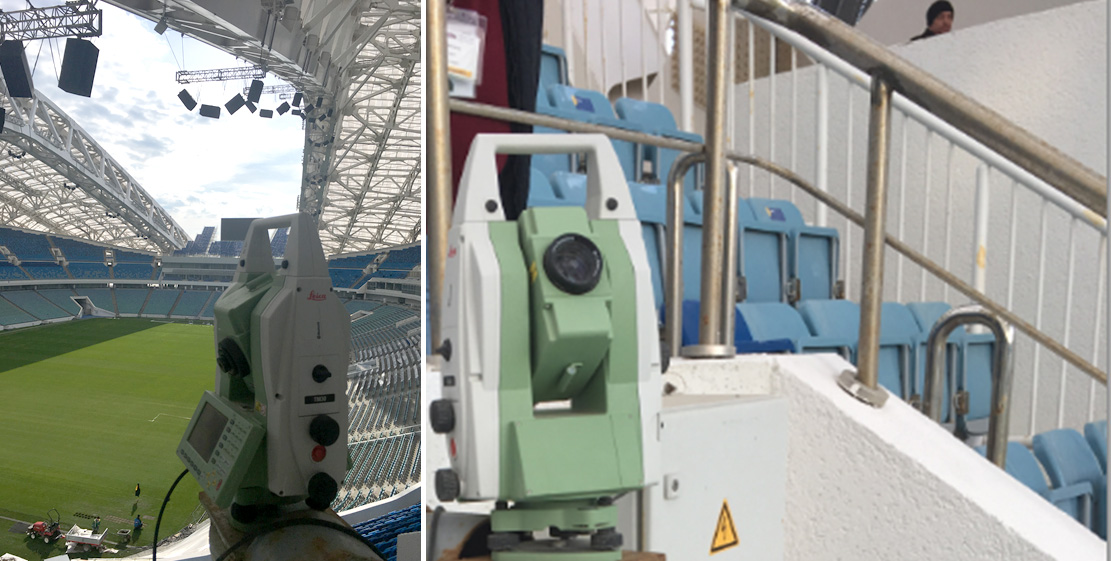 Leica sensors installed on the stadium

Secondly, all the collected data can be viewed in the form of online graphs as well as in the report form, which the system generates automatically. 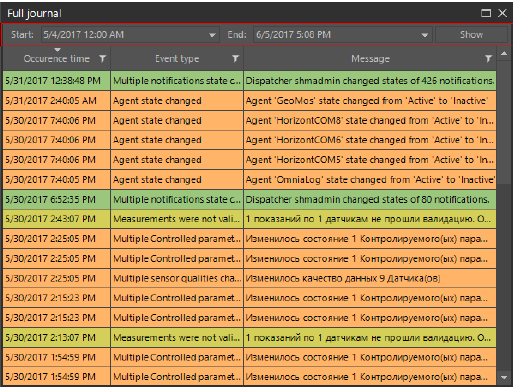 List of reports that can be accessed from SODIS Building M

Thirdly, SODIS Building M main structure involves six main features, which are connected with each other:

Because of this structure SODIS Building M allows an operator to set up the software the way it is required at each stage of the stadium lifecycle. For example, the algorithms and measured values collected during the Olympic/Paralympic games were different from those at the FIFA events, the flexibility of SODIS Building M allowed to change them, without requiring additional costs and time.

Main panel of SODIS Building M includes an access to the 3 key components of the system: monitored elements, sensors and controlled parameters 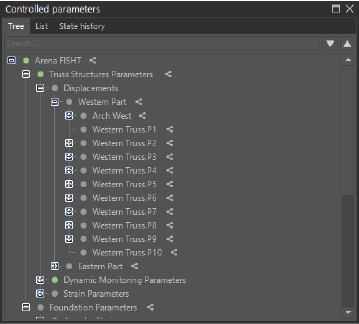 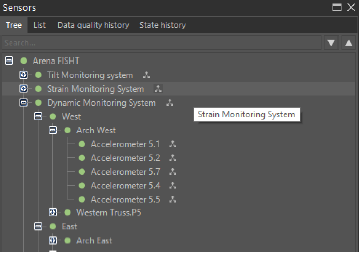 Fourth, SODIS Building M allows to process all of data, that can be required by the user. As it has been mentioned before, the equipment provided by SODIS Lab partners allowed the operator of the stadium to collect all the required data. The types of data that can be processed are: 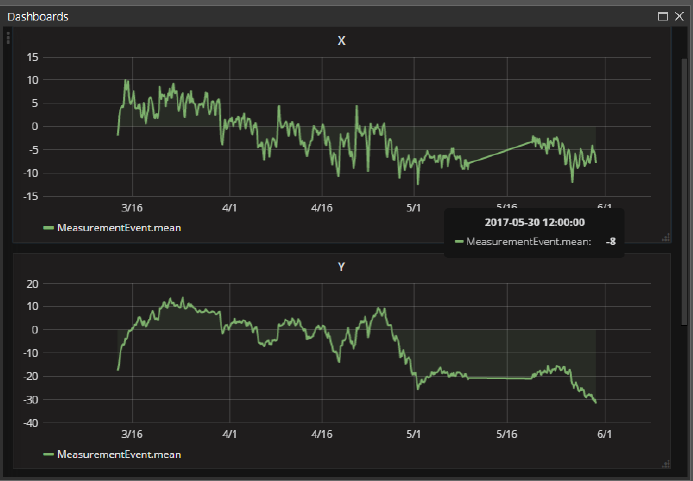 Finally, any user can not only learn how to work in SODIS Building M in shortest time possible, but also to customize the interface of the program, the way he wants it to be.

How did it work in real life?

On the basis of the stadium BIM model SODIS Lab designed the number of sensors required to be installed on the structures for an on-line health monitoring. Furthermore, all of the possible changes in the stadium construction due to its transformation have been taken into account to reduce the costs of the future works. The result of the SODIS Building M implementation was the “full picture” of the structural condition. People that were involved into the process of the stadium construction and transformation were able to use the model to their needs during all of the construction stages. Furthermore even during the process of the stadium construction there hasn’t been a reason for reviewing the safety parameters, due to the work, that has been done during the establishment of BIM model. However, if required, SODIS Building M allows making changes in the model within the shortest possible time. For example, that was a case with a change of the stadium from the indoor to outdoor object.